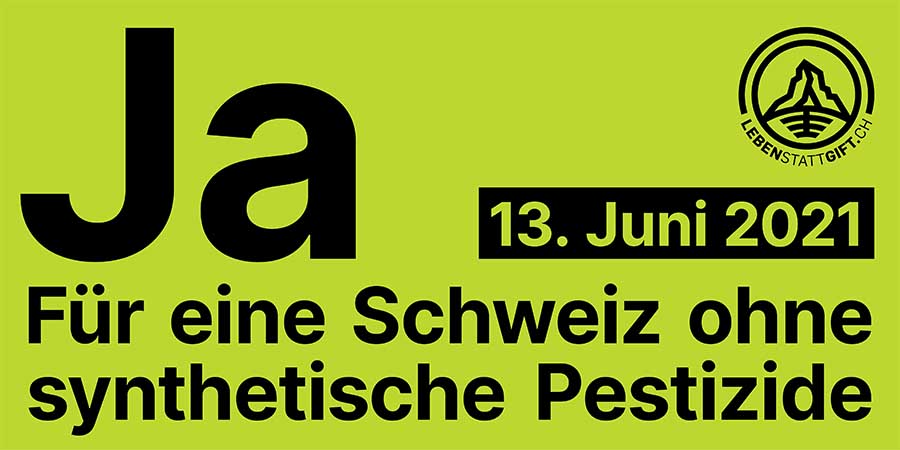 While Switzerland is preparing to vote to free itself from synthetic chemical pesticides, we must provide solutions for agriculture, the maintenance of green spaces and the transition in order to prove that a future without chemical molecules is possible !

This initiative, unique in Europe, for the first time gives citizens the opportunity to vote for or against the transition to agriculture without synthetic chemical pesticides in ten years or so. To know more https://lebenstattgift.ch/

In this context, I suggest that you watch my last documentary "Zero Phyto 100% Bio" for free on my site until June 13 in order to show:

"Zero Phyto 100% Bio" is available on DVD on  www.dahu.store

A big thank you to the associations Agir Pour l'Environnement, Bio Consom'acteurs and Générations Futures, co-producers of the documentary, for allowing this film to be released in theaters in January 2018 and to meet more than 36,000 spectators in theaters !

A promising future without pesticides

I had the opportunity to participate in a round table to discuss the initiative for a Switzerland free of synthetic chemical pesticides thanks to the intermediary of the association of small Swiss farmers :

Discussion podium that took place on Saturday March 27, 2021 and broadcast live on Facebook around the initiative For a Switzerland free of synthetic pesticides with Tristan Amez-Droz, organic farmer and baker, Natacha Litzistorf, City councilor of the City of Lausanne, Guillaume Bodin, documentary filmmaker and winegrower, Dr. Bertrand Buchs, doctor and member of the Geneva Grand Council and Stéphanie Hüsler, lawyer and member of the Initiative Committee. To inform about the opportunities that acceptance of the initiative would bring for us and future generations.

Pesticides in Switzerland : a major challenge

Since last year, I have helped a small team of young people to make a documentary to give voice to Swiss specialists who mostly support the initiative. I let you discover it :

Thank you to Samantha KELLER who made this documentary, Marc PREBANDIER, Guillaume THEBAULT, Vincent CHABLOZ, Timothée STEINER as well as all the speakers for this essential source of information to better understand the issues behind this initiative. Find all the sources on https://youtu.be/f034ctMWJWs

Pesticide initiatives, poison for agriculture ? On the TSR

On May 12, 2021, a debate with the initiators and those defending the no to initiatives took part on TSR in the very interesting program of the Swiss public service Infrarouge :

On June 13, 2021, 5 initiatives will be voted on by the Swiss, including two initiatives that tackle pesticides. The first, "For a Switzerland free from synthetic pesticides" wants to ban the use of these phytosanitary products, both in Switzerland and for imported products.

The second, “For Clean Drinking Water”, has a similar objective, but offers another path: reserve federal subsidies for farmers who forgo pesticides and antibiotics and who feed their livestock with fodder produced on their farm.

Fundamentally change the production model to protect biodiversity and health, or trust the professionals of the land to take care of it? This is what is at stake in a debate which has become very emotional in a Switzerland which is deeply divided on the subject.

Pesticide initiatives, a poison for agriculture? It was the debate on Wednesday, May 12th #RTSInfrarouge

I also take the opportunity to deliver my first documentary "Wine The Green Reolvution", also available on www.dahu.store, still proving by example that it is possible to do without synthetic chemical pesticides for wine production :

And as it is more difficult in Switzerland to do without synthetic chemical pesticides because of the steep terrain, here is a small episode of "Where are the vines?" with one of the pioneers of organic and biodynamic farming in Valais, Marie-Thérèse Chappaz, certified since 2003 on the steep slopes of Fully :

Thank you for your attention and, for many of you, for allowing me to produce and direct my documentaries by coming to see them in the cinema, to see them on TV or on DVD. The next film to be released is scheduled for 2022, it will be a logical sequel to "Wine The Green Revolution", to find out more it's here.