Pontet-Canet, a Château engaged in biodynamie 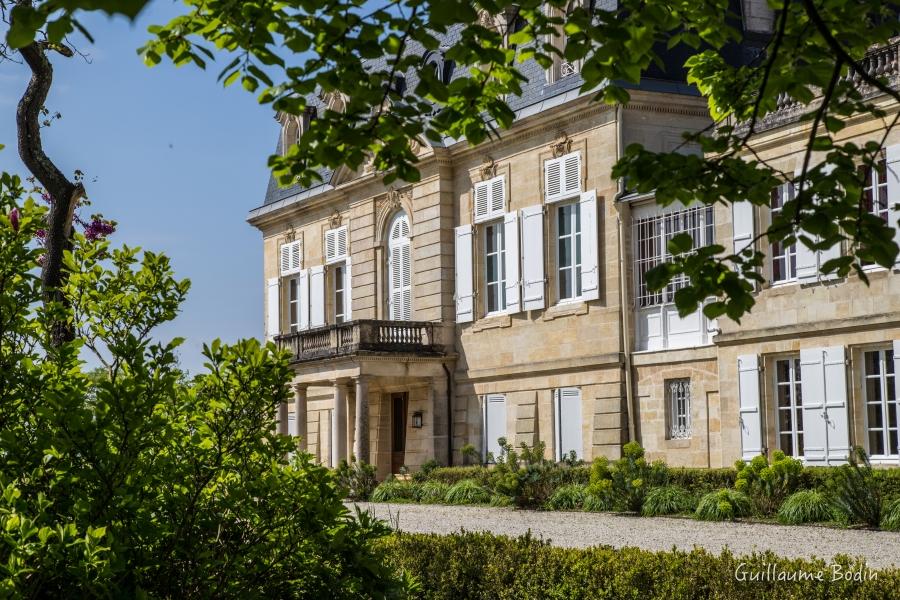 Since Elise lucet went to Bordeaux, the wines of the médoc often rhyme with pesticides !!!

It is true that, in the area, practices take time to change and organic wine-growing is considered to be inaccessible because of the particular climatic conditions in Gironde... But at the price to which the bottles are sold, it seems unacceptable to me that pesticides which can go up to 10000 times the Maximum Residue Limits of water can be found in wines ! It's very expensive for a glass of poison... I advise you the last book of Gilles-Eric Séralini and Jerome Douzelet "The taste of pesticides in wine" (actually only in french under the name "Le goût des pesticides dans le vin") which makes an important point on the question.

Château Pontet-canet in Pauillac has proven by example for over 15 years that it is possible to completely ban all synthetic chemical pesticides, to have biological and biodynamiques practices and to see the whole domain as a complex organism where every detail needs to be considered in a holistic manner. 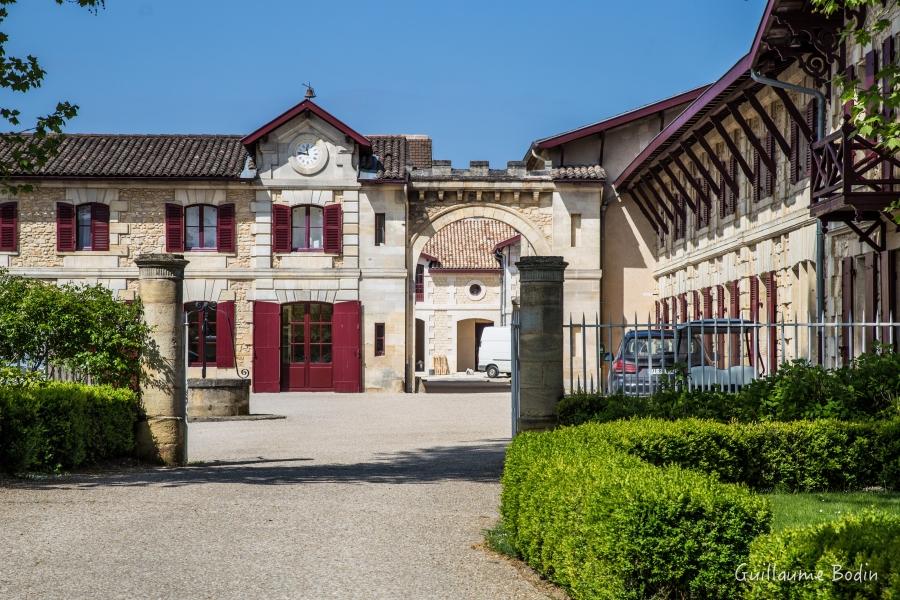 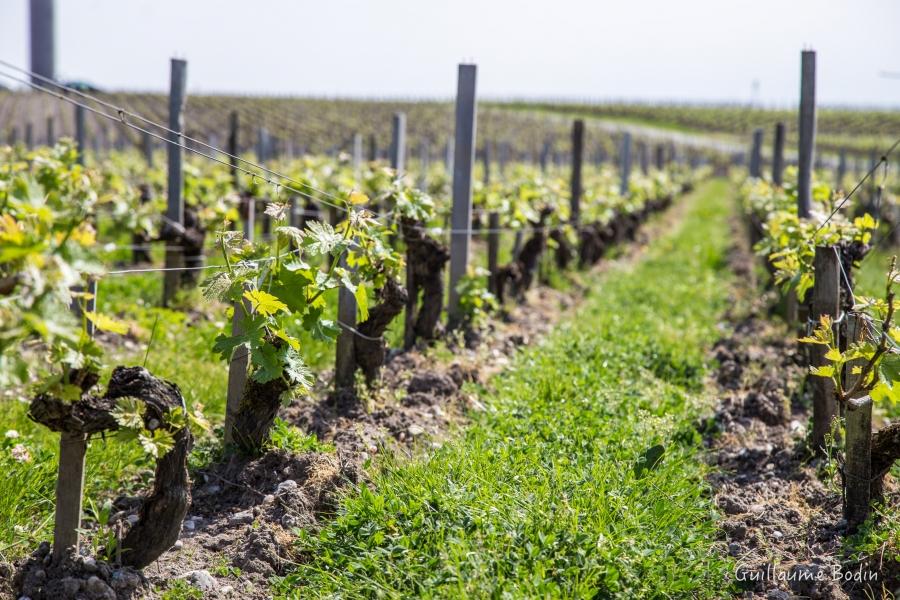 One of the vines of the 81 hectares of Château Pontet-Canet.

Jean-Michel COMME as happened on this Châtrau almost 30 years ago with many convictions. As a true conductor, he began to rehabilitate vineyards and buildings to become one of the most popular Château in the appellation Pauillac while he was considered by some critics as "Sleeping beauty". 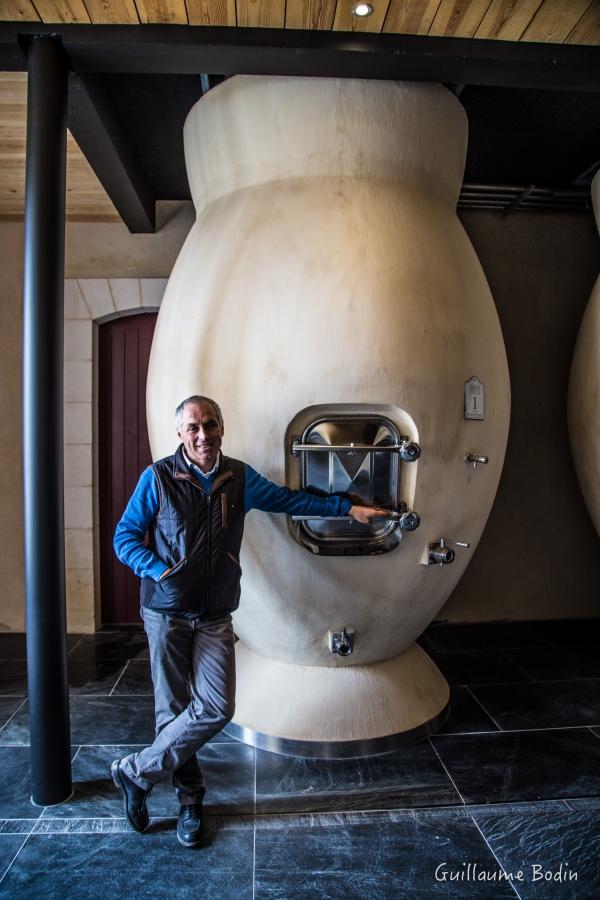 In front of one of the creation 100% Castle, realized with the marl of the foundations of the cellar which gives this magnificent color. - with Jean-Michel COMME at Château Pontet-Canet.

Far from the big speeches, the whole of the vine cycle is taken into account. The relocation of 1,5 km of hedges on the edge of vines in recent years allows to recreate biodiversity to break these oceans of vines and allow birds and other animals to have a suitable habitat. 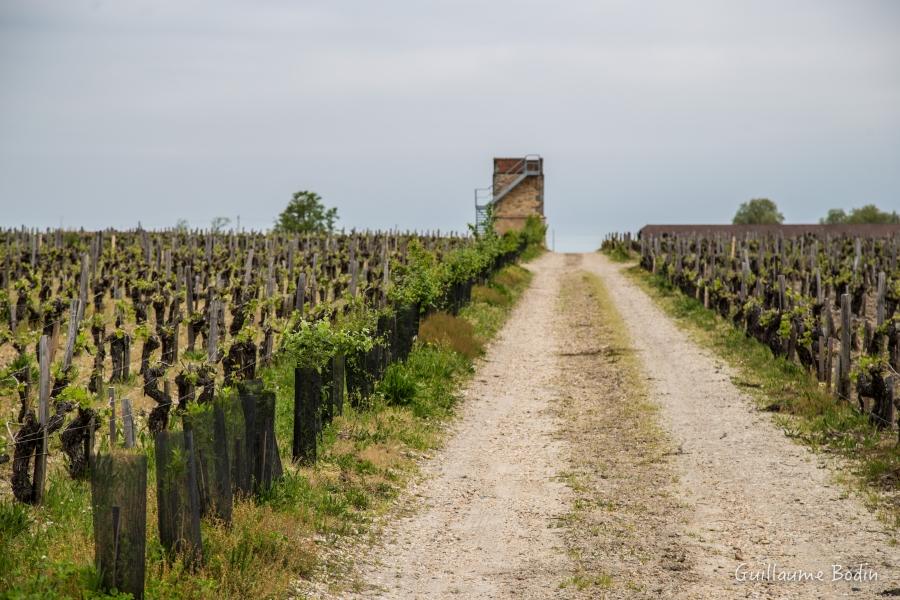 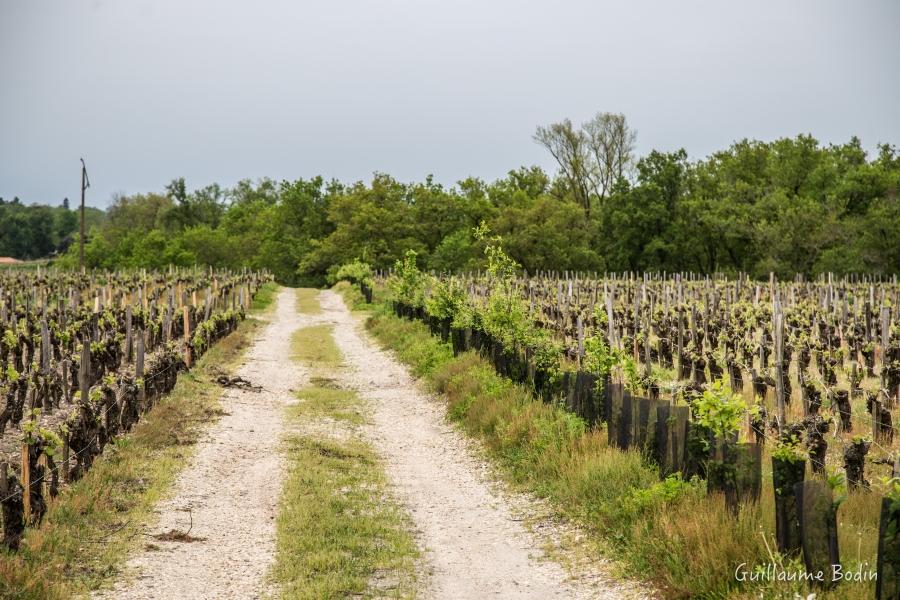 The Château has more than 10 horses in order to work half of the surface with animal traction by creating suitable equipment for the comfort of the user and animals, a new and comfortable stable is also under construction to remove the box built "in the meantime". 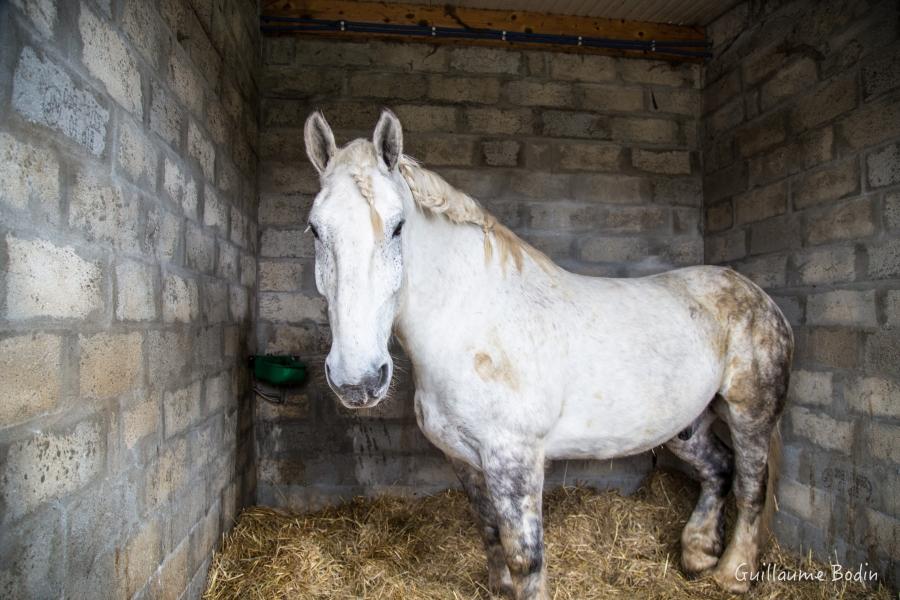 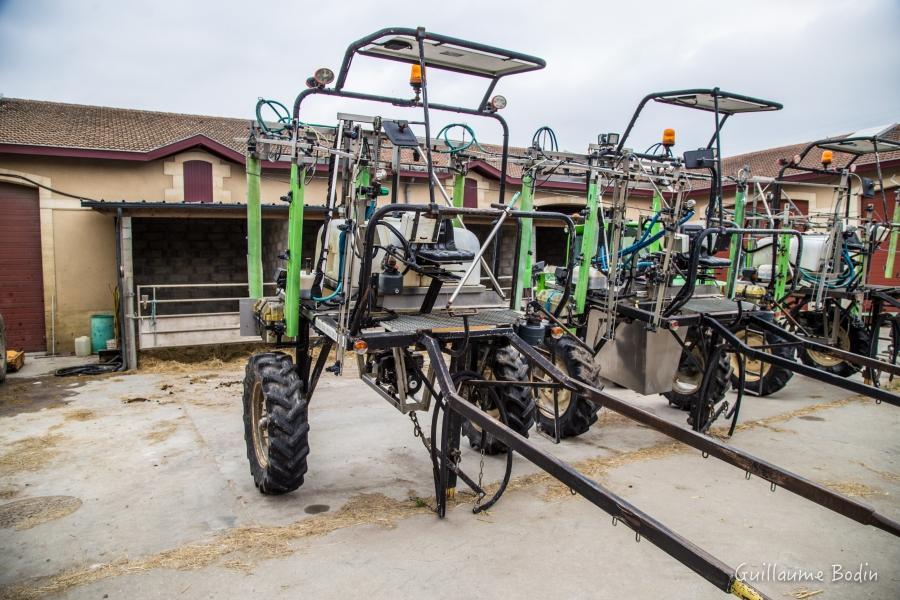 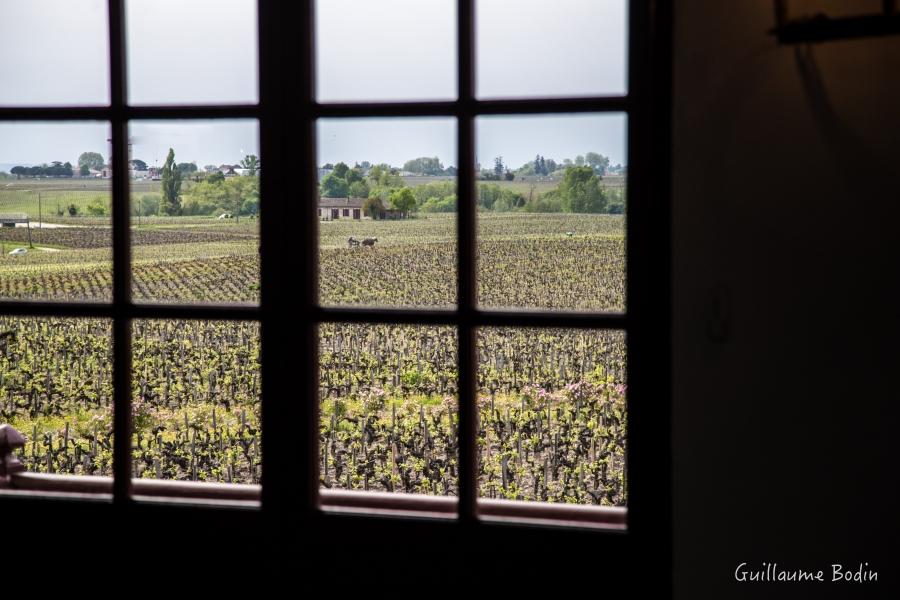 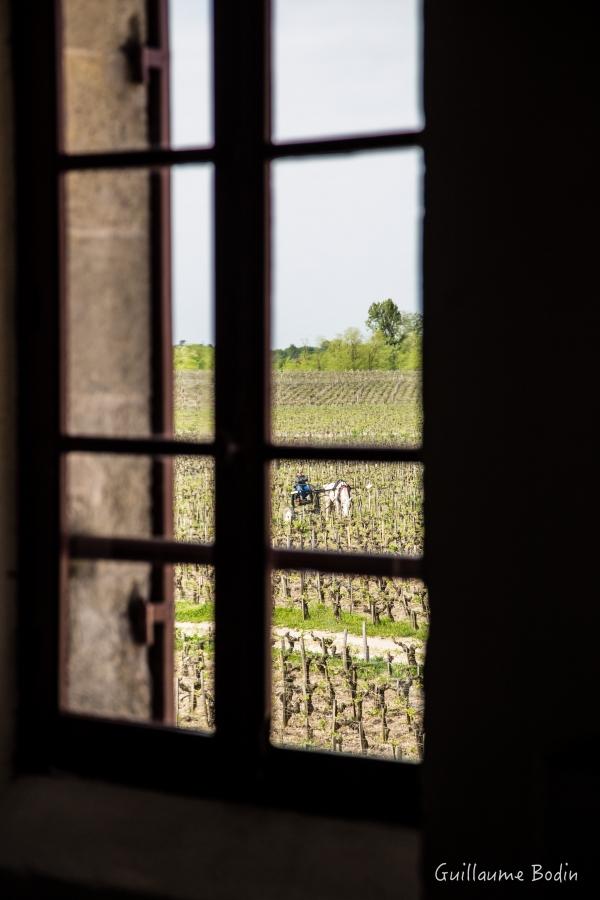 The Castle has its own masons, stone cutters, carpenters... in order to be as autonomous as possible and to create buildings in respect of old stones and staff. More than 50 geothermal wells have been drilled to provide clean and efficient nopetrol energy. 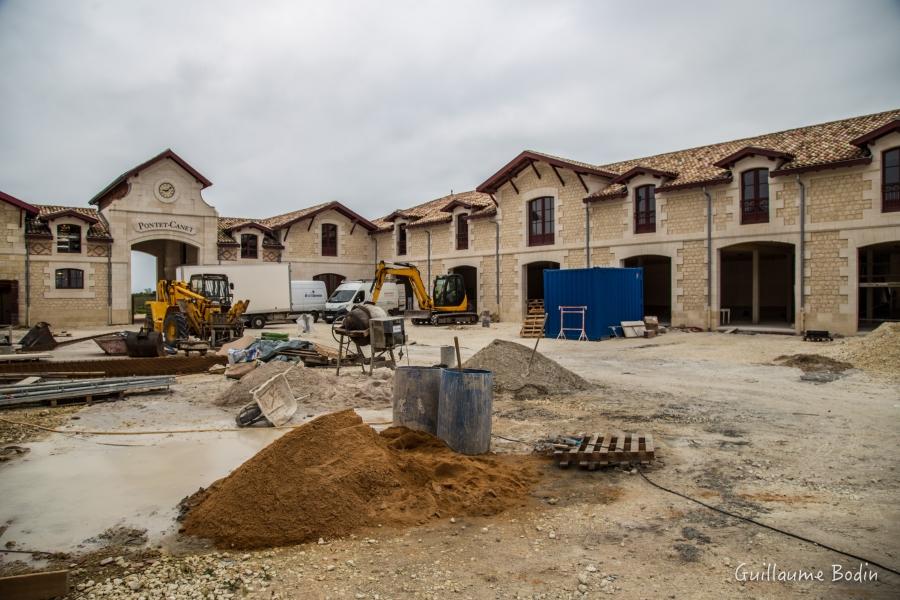 Work in progress while old stone, here everything is new but in the tradition ! On the ground floor the horses will have a barn of 300 square meters and a space in the yard of 400 square meters to frolic. On the floor more than 100 beds for the grape harvesters are being finished for the season to come, great luxury for a Château bordelais ! - at à Chateau Pontet-Canet. 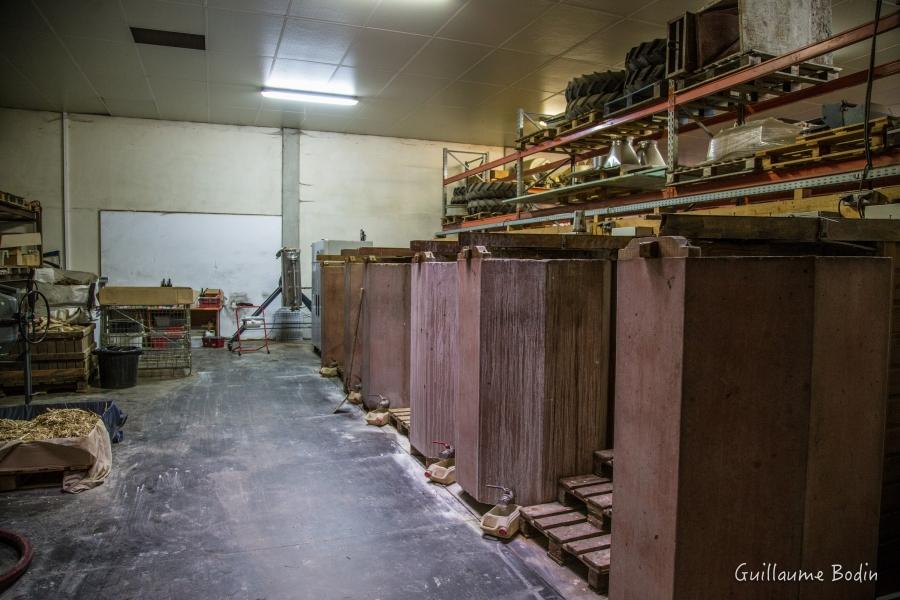 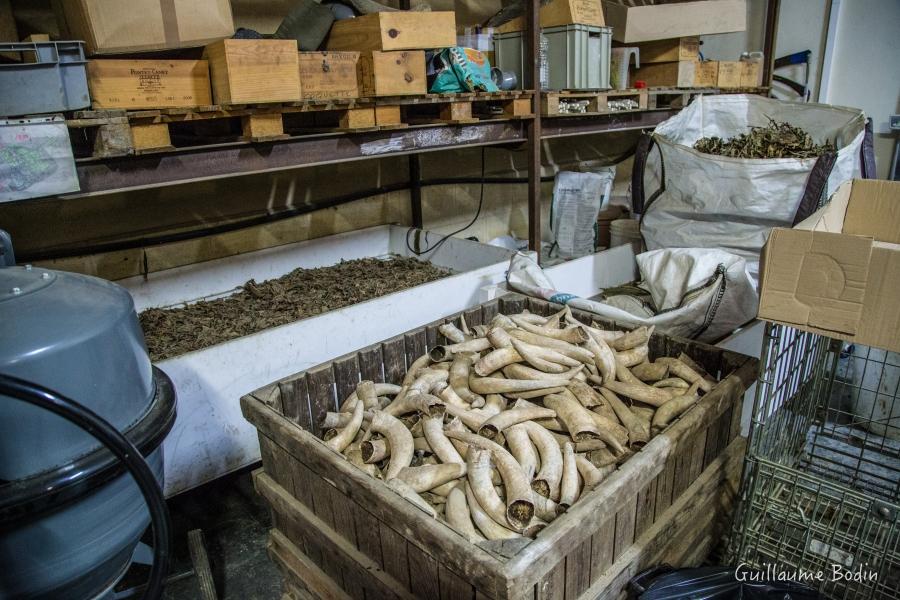 The comfrey drying, the horns just out of the ground containing the horn dung all winter. - at Chateau Pontet-Canet. 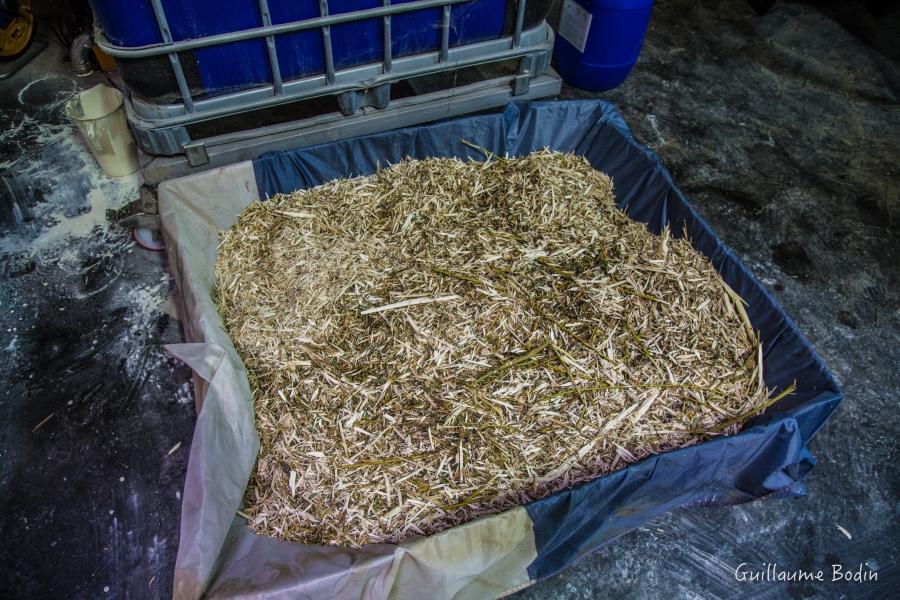 Crushed willow will stimulate the plant's natural defenses during the treatments of the coming season. - at Chateau Pontet-Canet.

I don't spend time on biological and biodynamiques practices which do not change fundamentally in relation to what I have already been able to explain in my documentaries, but the curetage of some feet may be interested in curious vignerons of these practices because 2 Cureteurs have been trained to practice more than 80% of their time this method in order to avoid ripping all feet from esca. 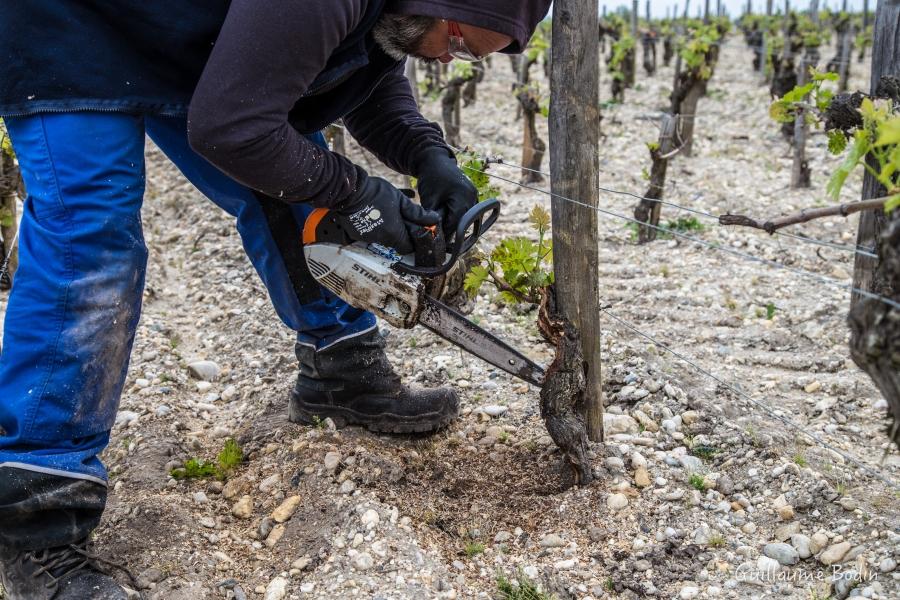 One of the two professional curetors. His job is to remove the tinder in the ceps with esca to dry the mushroom and the vine live a little longer. The results are very interesting !  - at Chateau Pontet-Canet. 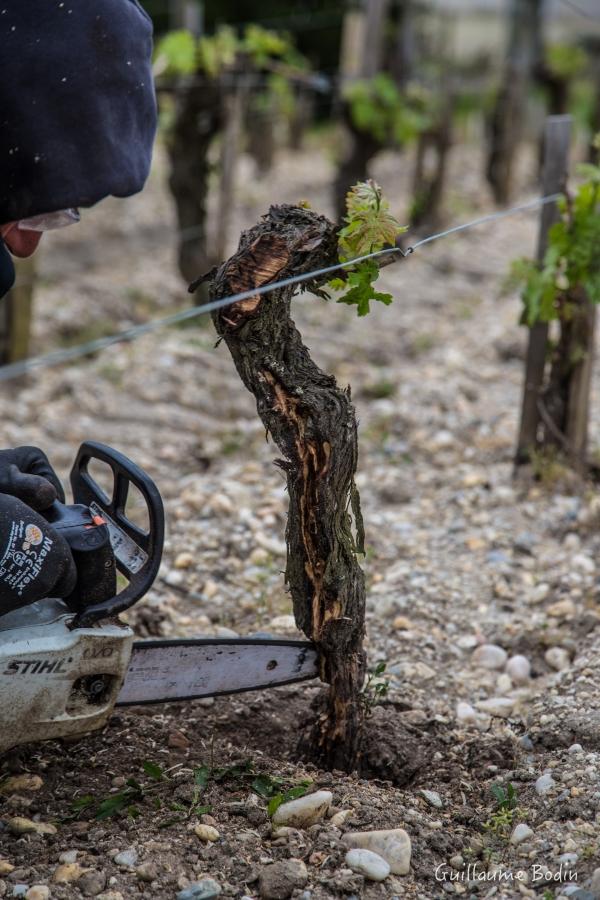 In the wine cellar the wines have changed dramatically and Jean-Michel COMME has been investing a great deal of time and thinking about simplifying practices. Today the wines are essentially vinified from concrete vats with a whole new cuverie, which presents locally produced concrete vats on a drawing of Jean-Michel and with the marne recovered during the construction of the new cellar. Before wines aged in oak barrels 100% new, the practice evolved with the use of 35% concrete amphoras to soften a little of the oak-marked effects, of 15% of 1 wine casks which will be replaced in the future by amphoras and 50% new casks. 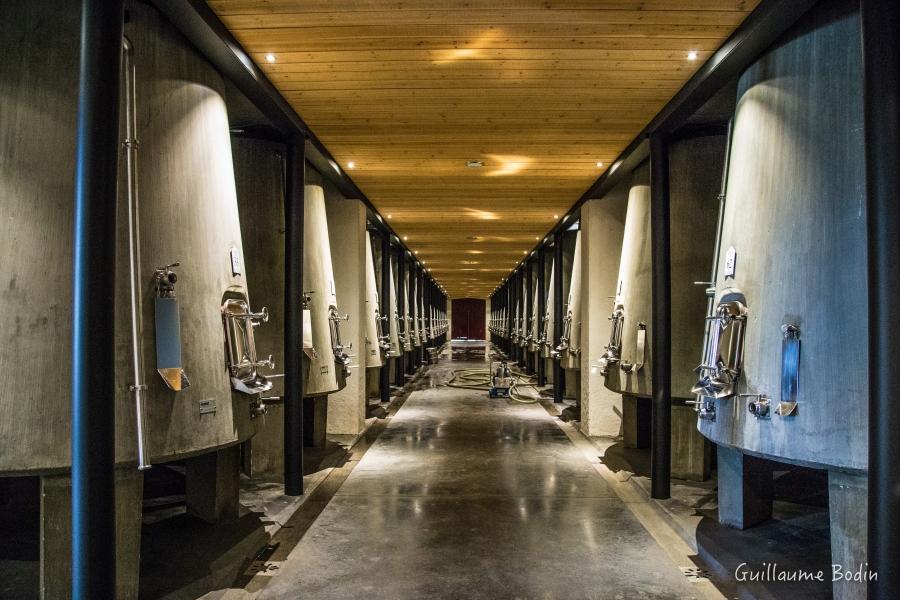 The series of tank Nomblot bought in 2005 before the company was bought by the Italians (well specified because the quality has deteriorated then cf: Mas de Libian among others) – at Chateau Pontet-Canet. 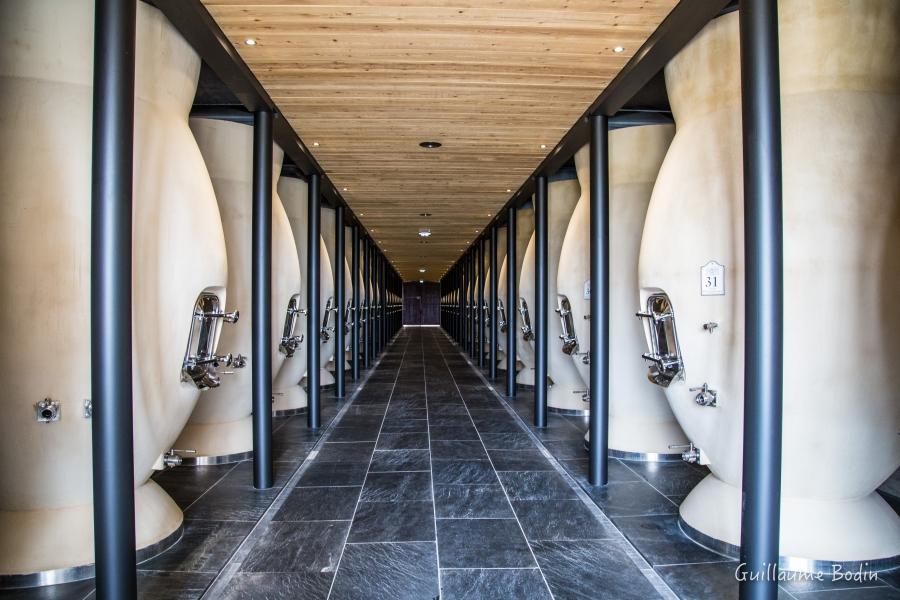 The new concrete tanks made with marl from the foundations of the cellar. Note that there is no electricity in this cellar except 12V bulbs to avoid any disturbance. The slabs are in slate because the granite is very weakly radioactive. The serpentine heating and cooling system is completely manual without thermoregulation and the energy comes from geothermal energy. - at Chateau Pontet-Canet. 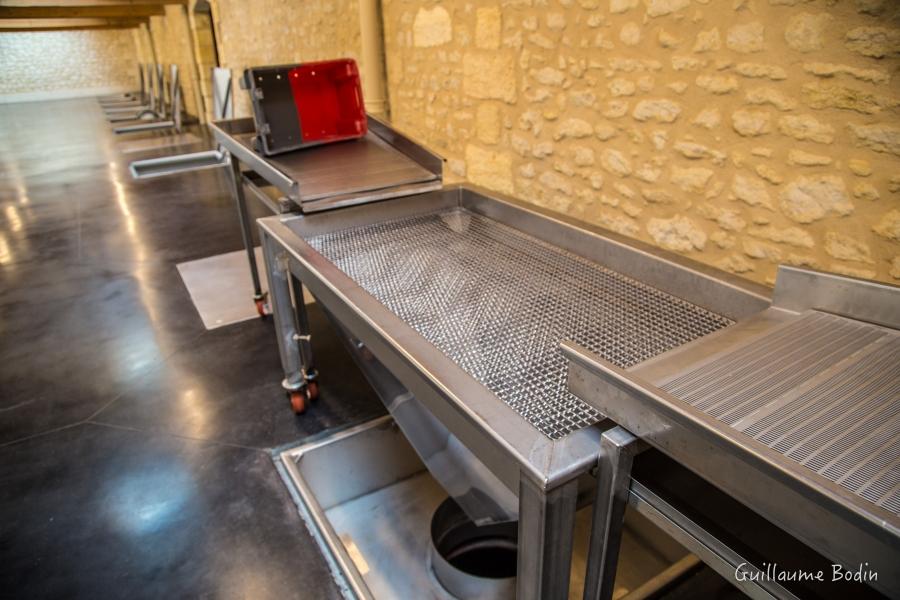 Fully manual sorting system eliminates electricity for the health of the employees and improves the energy in the cellar. With the same number of people as before, the manual pooring and manual destemming is as effective as before. – at Chateau Pontet-Canet. 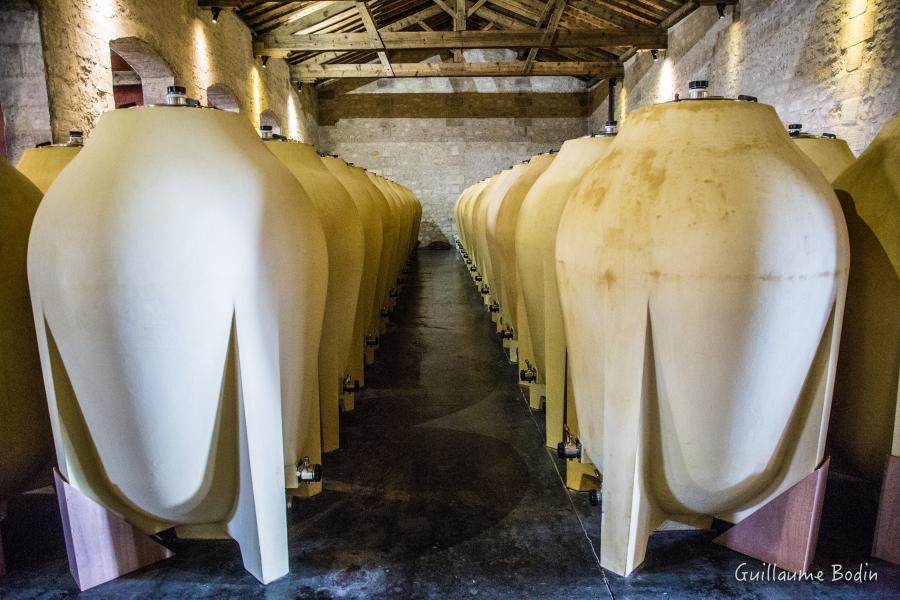 Concrete amphora whose shape was designed by Jean-Michel COMME and with a small part of limestone for some and graves for others to give an impulse to the wines. To his surprise Jean-Michel COMME saw a significant difference on the wines ... Like nothing is innocuous. – at Chateau Pontet-Canet. 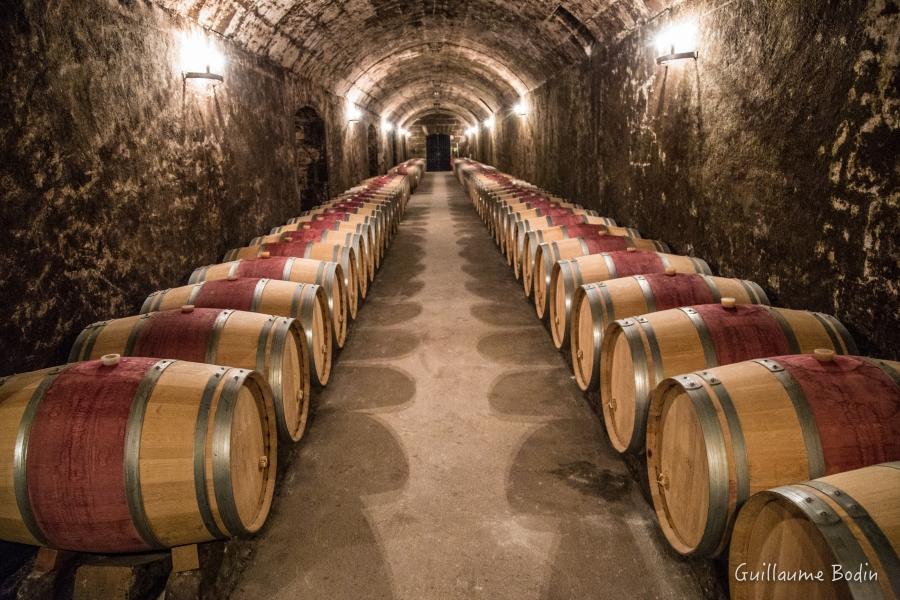 The oldest winery on the estate where the wines of the year are maturing - at Chateau Pontet-Canet. 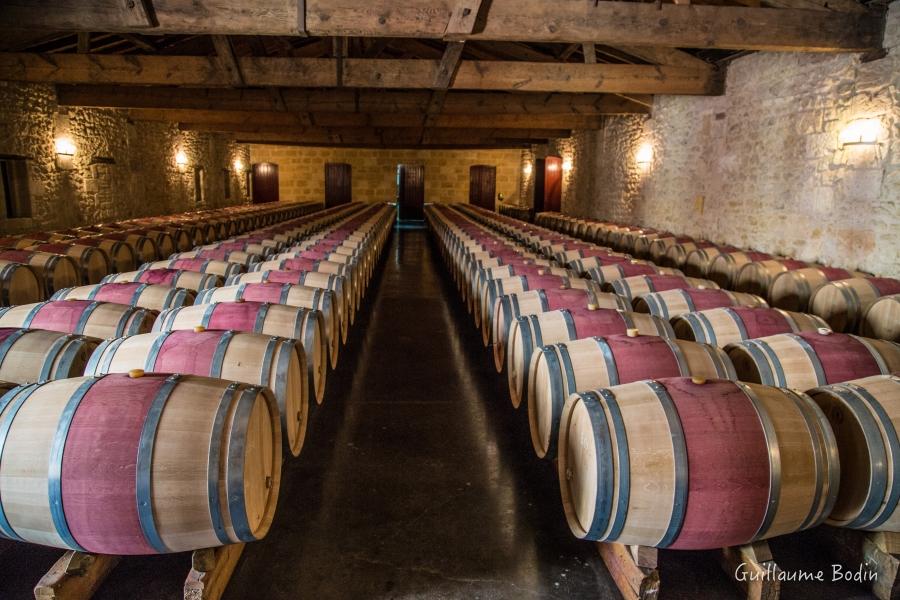 The current cellar aging in oak barrels.– at Chateau Pontet-Canet.

Pontet-Canet 2017 which I have been able to taste in primeur because it will not be bottled until next year is of unquestionable finesse, the fruit in the glass with fabulous notes of menthols come subtly to bind to aromas that bring the oak barrel. The smooth mouth with a spine worn by acids calls for another sip of this fabulous nectar. You can feel the life of the soil in these wines by the digeste in the glasses. And above all, I am sure that I have only had the expression of grapes and not the aromas of pesticides ! 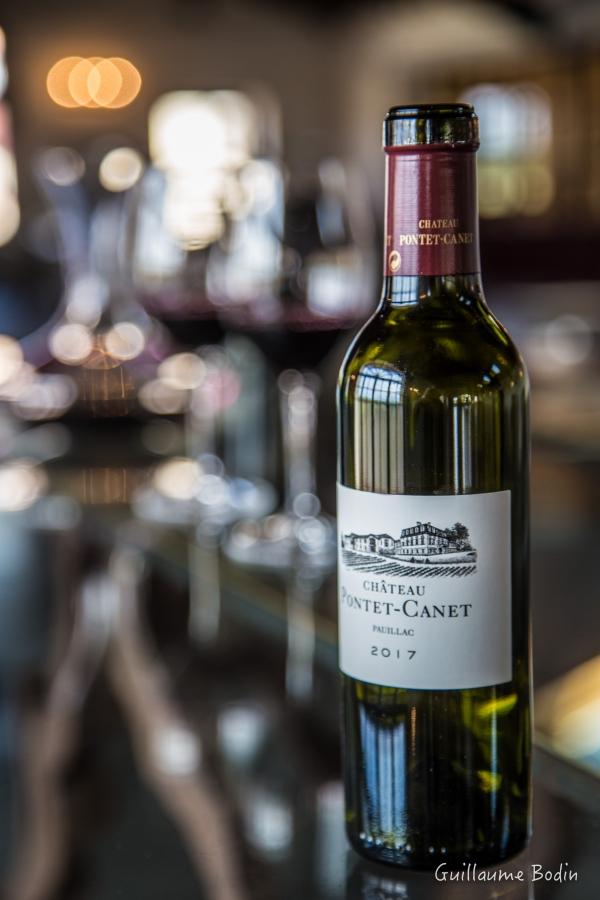 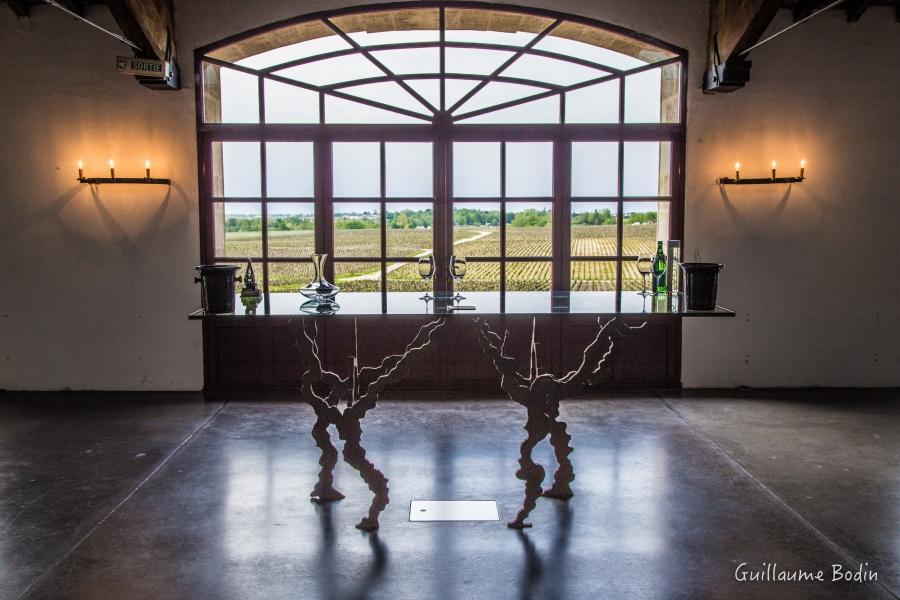 A wine to discover definitely even if access to bottles remains complicated for small budgets... it is noted that there are wines in Bordeaux at 8€ in bio like Daniel Gevaert I went to visit last Thursday ;-) 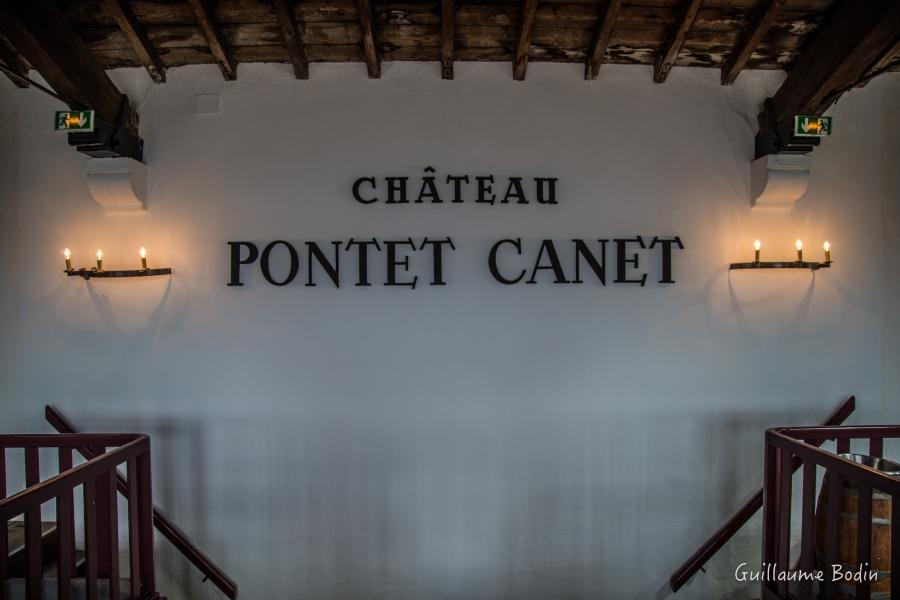