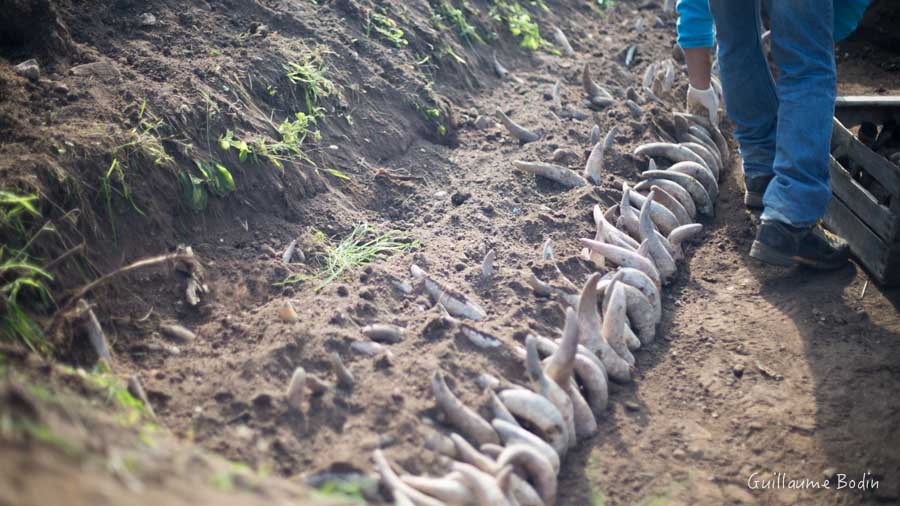 By encompassing the natural environment in its overall vision, biodynamic agriculture aims to produce the best possible in ways that allow future generations to obtain the same – or even better – results. The soil itself is key in this type of agriculture, because it is ultimately dirt on which all life on earth depends, and in particular, the first metre of topsoil.

This humus-rich topsoil has taken thousands of years to get to its present state of frenetic microbiological activity and abundant microflora. These micro-organisms work full-time producing the organic matter that plants need for development. It is clear, then, that we need to take care of them. Conventional farming has destroyed the majority of these microscopic populations with fungicides, insecticides and herbicides to the point that it is now necessary to do an urgent about-face, before we fully devastate the earth, everywhere.

Biodynamic farming offers a remedy. In a dozen or so years, it is possible to bring damaged soil back to a happy, healthy state. While this may seem a long spell for today's perspective (where will you be in 2025?), it is a relatively short period in the span of the earth, and what it has seen before and will see after us. 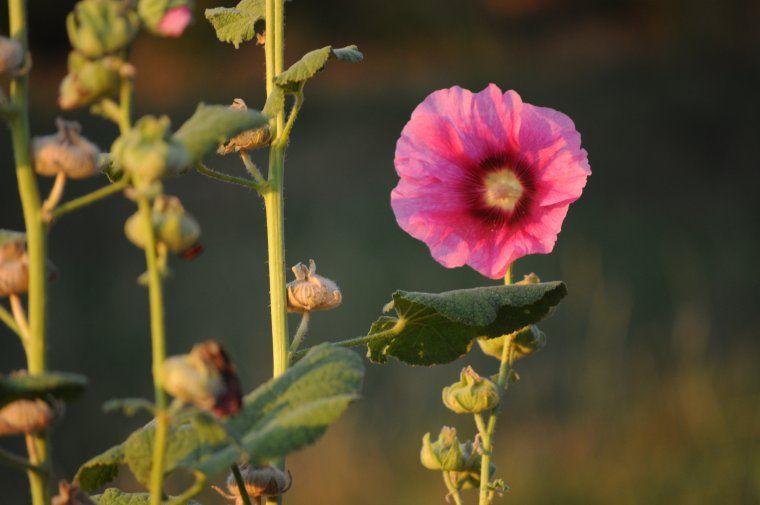 The Austrian social thinker Rudolf Steiner (1861-1925) originated our modern philosophy of biodynamics. A great philosopher of his era, he had the faculty for linking the various aspects of agriculture to their spiritual equivalents. And while he considered modern science a fine thing, he encouraged people not to forget all the teachings and wisdom passed down through generations – which, in the case of agriculture, went back more than 7900 years.

The bases of biodynamic agriculture were established at a conference called by European agriculturalists in Germany (now part of Poland), in June 1924. Because even then, in 1924, there were farmers inquiring into the continued use of the chemical fertilisers generated en masse during World War I: They were already observing a poorer quality of food.

A book assembling the thoughts presented at the 1924 conference in Koberwitz was published under the title Agriculture Course: The Birth Of The Biodynamic Method, though it can be difficult to read for the uninitiated. Steiner's discourse drew attention to the harm caused by feeding meat and bone meal (usually from other cattle) to livestock, which leads to the over-production of the uric acid going to the animal's brain, making it go crazy. Seventy years later, the mad cow disease scandal brought to wide-spread attention the detriments of feeding processed animals to livestock. And this was only one of the topics discussed at the gathering. 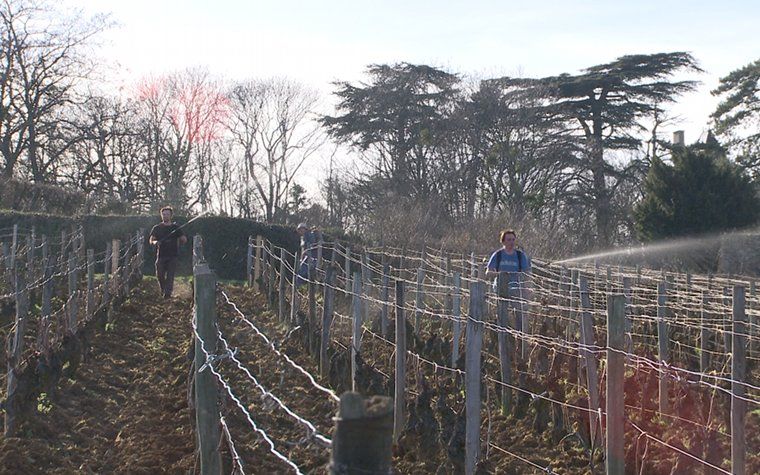 Biodynamic agriculture has many similarities with organic agriculture, like abstaining from using synthetically produced plant treatments. But there are telling differences: In viticulture, for example, biodynamic farming limits the use of copper sulphate, a fungicide, to 15kg per hectare over the course of five years, for an average of 3kg copper sulphate per hectare per year. This is half the allowance given in organic farming.

The causes of this limitation are simple. Copper sulphate is a fungicide and, when it is taken into the soil, it has a direct impact on the microflora and mycorrhizae – notably by destroying them. To limit the use of copper sulphate, infusions, teas and decoctions of traditional medicinal plant like stinging nettle, chamomile blossoms and common valerian are sprayed. The natural properties contained in these plants permeate the water of the teas and infusions, offering protection against mildew and allowing the use of a much lower amount of copper sulphate than in organic agriculture.

Respecting the rhythms of the day and the year, along with phases of the moon, is essential, and while the calendar of the stars can play a role, this is of lesser importance. But paying attention to the phases of the moon does have an impact, and its significance is easier to take in than might be imagined. Science has already proven the influence of the moon on the waters of the seas and oceans – what we call tides – so it is easy to make the extension to plants, which themselves are 80 to 95 per cent water. Plants undergo the same lunar influence as is seen in the tides, it's just that because they are smaller than an ocean, it is harder for us to see. 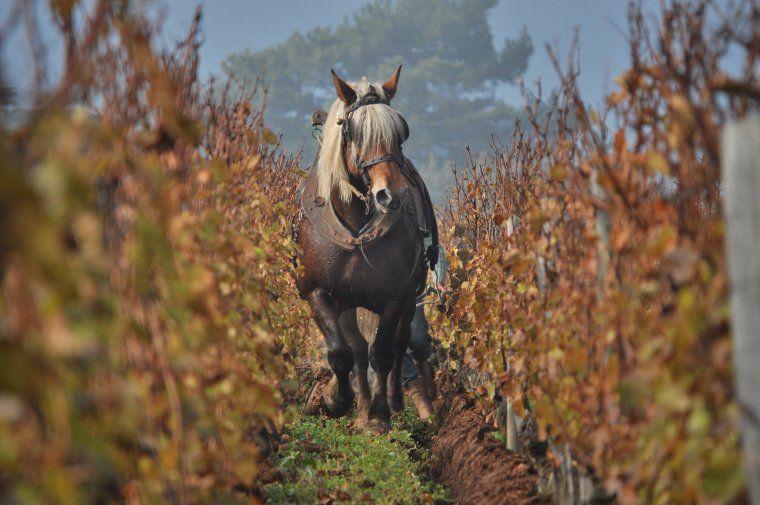 Horse ploughing in the vineyard.

A concrete example can be had in sap. Sap levels tend to be lower when the moon is waning, and higher when the moon in waxing. Using this rhythm, the grape grower can know when it is best to prune, depending on whether he wants to limit or promote vine vigour in the following year.

With biodynamic agriculture, the land is ploughed to reduce the impact of weeds on crops. Fertilisation through compost or manure nourishes the microbial populations of the soil, which, in turn, transform these natural additives into rich organic matter. Using a cow horn-manure spray (often referred to by its field preparation name of 500) throughout the year helps maintain good levels of bacteria and fungi. The 500 is made by filling the horn of a bull with cow manure; in the autumn, the horn is buried, until spring. During this time, intense microbiological activity takes place in the horn, and when it is exhumed, the manure contained in the horn – which has been transformed into a very rich humus full of good fungi and bacteria – can be used.

This type of agriculture, which remains rather idealistic for the majority of agriculturalists, is drawing more and more followers, farmers who are coming to recognise the negative impacts of conventional agriculture and seeking out methods that are more in tune with nature than with the synthetic fertilisers lobby. Each person who practises biodynamics can create his own biodynamic arena by following the cycles of the moon and the planets. We all have varying views on the spiritual realm, which means that how we choose to apply biodynamic principles will differ from one person to the other. And this is what makes a concept like biodynamic agriculture so interesting: the diversity!

The certification label “Demeter”, the first ecological trademark for organically produced foods, on an item signals that it has been produced adhering to biodynamic standards. This logo can only be used when the producing farm is certified biodynamic by Demeter International or one of its local branches.

Thibault Liger Belair is an Epicurean fascinated from youngest sound age by the world of wine. With his team he produces great wines of Burgundy resulting essentially from the Côte de Nuits but also from the Beaujolais region.

Pierre and Vincent Masson explain to us the role of their company: Biodynamie Services and the interest for which it is important to choose its plants with the aim of the use under forms of biodynamic preparations in agriculture.

Pierre Masson is one of the biodynamic advisers the most recognized in France at the moment. He explains us the ins and outs of the biodynamic agriculture in particular the respect for the lunar and astral rhythms applied to this farming introduced on a philosophic movement at first...