Claude and Lydia Bourguignon are soil microbiologists, they study, experiment, analyze in order to better understand the main wine terroirs. Guests at an oenological lunch at the Hotel Albert 1er in Chamonix on Saturday the 25th of August 2012... Throughout the conference, the customers could discover the soil as they have never seen...

The major soils are like a concert, the soil is the musical piece, the vine is the instrument and the winemaker is the interpreter. 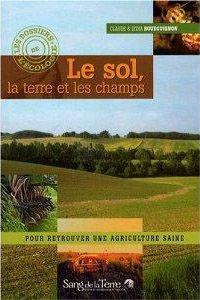 This conference is a summary of Claude and Lydia Bourguignon’s book which was published and updated in 2008 by Editions Sang de la Terre. In "Le sol, la terre et les champs" a number of explanations can be found on the soil and equally some solutions for the future of our planet.

- VIDEO What is the terroir?
- Narration of the terroir
- What is terroir?
- Soil elements
- Chemical components of soil
- Biological awarness of soils
- VIDEO Where is the world heading?
- Biodynamics, what relation?
- About this conference 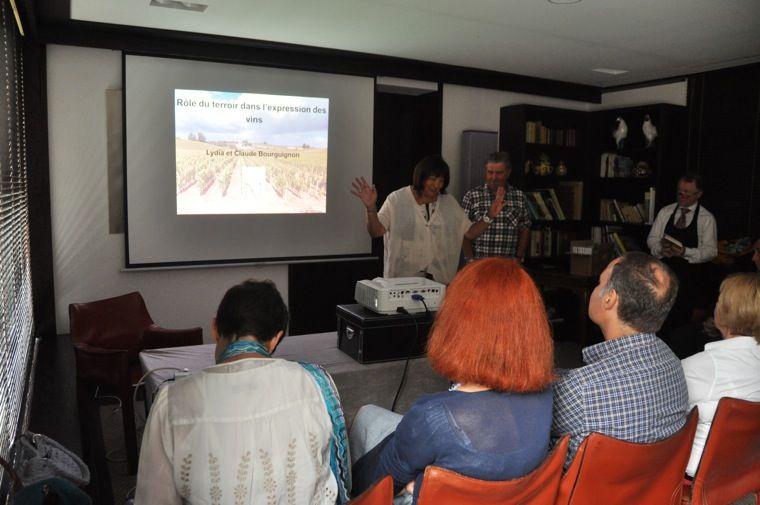 Lydia Bourguignon hosting the conference at the oenological lunch at the Hotel Albert 1er in Chamonix.

When the Bourguignon voluntarily left INRA (National Institute for Agricultural Research) to set up their own LAMS laboratory, they were not highly regarded in the community, 98% of the soil was weeded, they advocated a return to a less intoxicated soil which is caused by all the products used in the petrochemical industry.

Nowadays, after more than 30 years of work, conferences, pedagogy, they have succeeded to alter many farmers’ point of views in respect to soils. 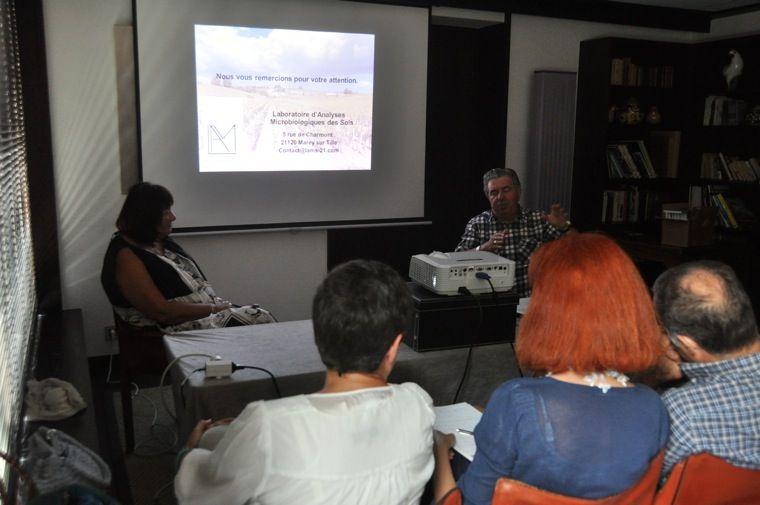 Claude Bourguignon hosting the conference at the oenological lunch at the Hotel Albert 1er in Chamonix.

What is the Terroir?

Find the full documentary on www.youtube.com

Narration of the terroir

The terroirs are created by Man, if the oldest Clos Burgundian is "Clos de Bèze" in Gevrey-Chambertin it is due to green revolutionists. But the acknowledgment of certain terroirs is directly connected to geographic approximity which put forward the transport of wine such as rivers and seas, the best example is the region of Bordeaux where it was possible to rapidly export wine to England.  Contrary to the wine-makers in Cahors who were obliged to cross Bordeaux through the Garonne River and the department of Gironde to export their wines, the residents in Bordeaux demanded a very high tax rate on the local products of Cahors which in turn failed compared to local products of Bordeaux… 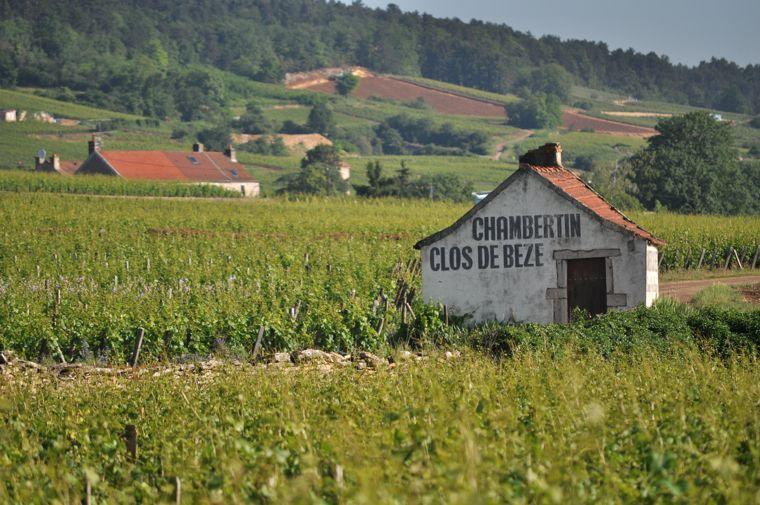 Since the era of Louis Pasteur, we have not stopped the winemaking technical evolution until we have succeeded to produce wine without using soils. With this wave, various qualities of wines appeared and favoured the disappearance of old wine making techniques which are less known but fully adapted to soils and climates where they were developed generations ago. The Bourguignon have always fought to preserve local wines which goes against this abusive technology or getting rid of old vines so that more famous brands can profit.

What is a Terroir?

Terroir is a special set of characteristics: climate , topography, geology, soil of a certain place, interacting with the plant's genetics, express in agricultural products such as wine but the upper hand is always that of nature.

The climate is a very important element. If it is too hot, colors, acids and flavors are burnt. If it is very cold, it becomes hard for the vine to metabolise these components.

The topography has played a very important role in localising good vineyard. The previous generations were aware that a soil which is well-drained permits a prompt warming because the air it contains warms up quicker than the water that an undrained soil contains. It is in a temperate soil that the vine produces the best wines, and therefore the predecessors planted sloping vineyards where water flows naturally. It is only afterwards and because the engines arrived that we could drain vast surfaces of soil to grow vines, but the result is still not the same ... And of course the inclination of the slope permits a good exposition to sun light, something that every wine-maker is looking for, the maturity of the grapes. 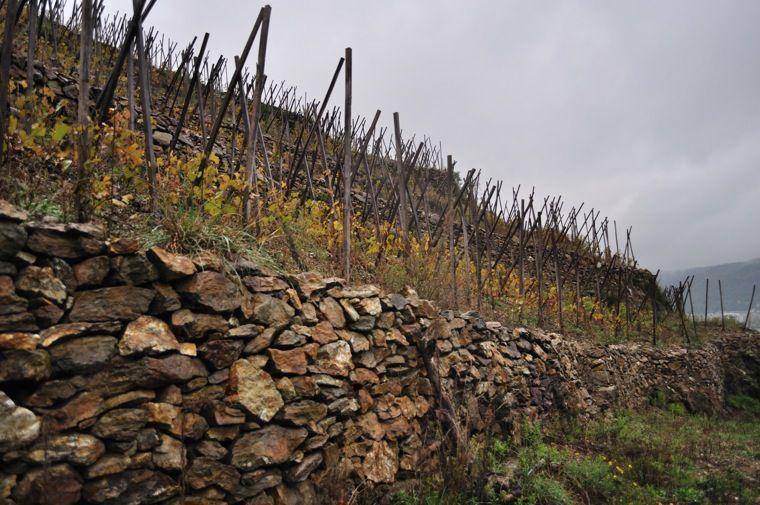 The vineyards of the Côte-Rôtie, a fine example of vines planted in hillsides.

The geology is inevitable because in profound soils, the vines will seek minerals that are responsible for the metabolisation of the flavors. Around the world, the soils are composed of:

The vineyard on igneous rocks in Kaiserstuhl, Germany © Eisen Nickel

The soil -that should not exceed more than 60 centimeters to produce the finest wines- can easily deteriorate in quality if herbicides are used. In fact, it is unacceptable that these products are always authorised on 1er and Grand Cru…

All grape varieties of Vitis Vinefera have changed during the thousand of years depending on soils and climates in order to produce Riesling, Pinot and Cabernet. Nowadays, Bordeaux reflects a very good image and it is unfortunate that some wine-makers privilege varieties of Bordeaux instead of other local varieties which will surely disappear and be replaced by one standard taste.

The rootstock plays a major role in the production of small roots such as SO4 (productive varities). Whereas what we are looking for is a big and strong root with some ramifications as in the rootstock 161-49 or Riparia.

The fact that the density of the plants depends on the richness of the soil is changing. In rich soils, the previous generations planted with less density whereas in the poor soils they planted with more concentration.
But these levels have all disappeared in front of the mechanization though sacrificing the quality of wines. (Burgundy reduced by 14,000 plants per hectare from 24,000 to 10,000 p/h; the Champagne region from 50000 to 10000... following the seeding after the Phylloxera disease).

The pruning system changes depending on location, grape varieties and climate. Ignoring these factors will result in an obvious loss of taste in the wines. Claude Bourguignon likes to recall some anecdotes: the Santorini wineries in Greece have always been shaped as a “nest” and this because the pumice stones found in the soil provide the grapes -which happen to be inside this nest- with humidity and protect them from salt found in sprays. When some investors arrived on the island, they decided to support the vines plants, a total failure because the grapes were so salty that it was impossible to use them for wine. 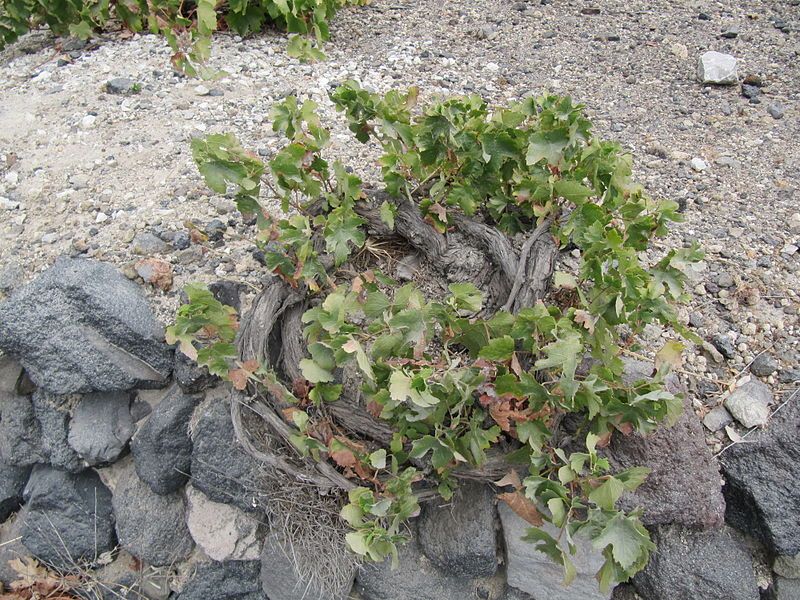 Shaped as a bird nest in Santorini, Greece © seligmanwait

The structure should be well ventilated so that it can easily get rid of extra water and facilitate warming. The use of herbicides and heavy machinery reduce this ventilation and therefore the warming of the soil. Good ventilation can equally facilitate the growth of the vine.

The Bourguignon state that previous vine implantation depended on the structure of the clay. They added “surely the people must have tasted the soil but it is the layers of clay soil that reveal it all" . You have to imagine the structure of clays like a book with all its pages, depending on the paper quality, the pages are more or less important compared to the thickness of the book...
Well for the clay soils it is similar! Knowing that clay soils with multiple layers are better adapted for red wines (see Romanée-Conti) whereas clay soils with less layers are more suitable for white wines. 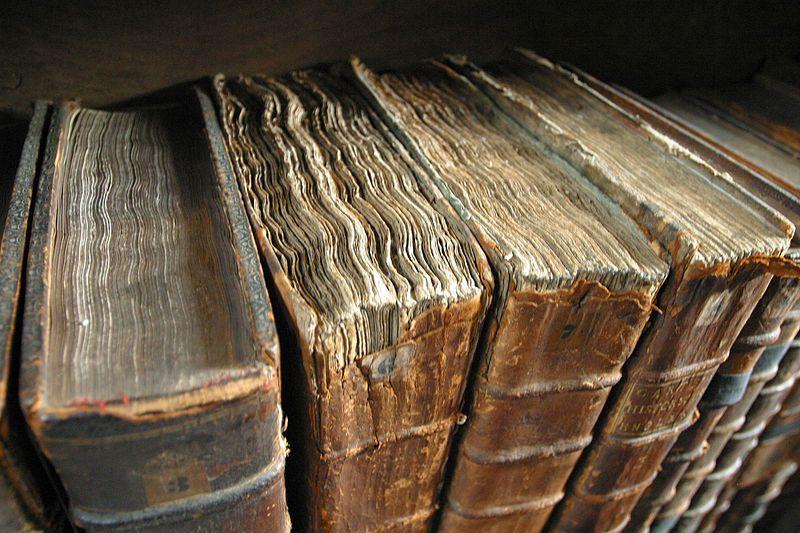 We have already spoken about the geology in “What is the Terroir”, the soil is paramount to the establishment of a vineyard, namely:

It is important to understand that flavours do not contain the mineral elements found in soils. But how much do we ponder on the fact that wines seek these minerals on their own.

The enzymes need these mineral elements (copper, magnesium, manganese, molybdenum, nickel, iron, sodium, zinc ...) in order to produce and metabolize flavours. If the enzymes lack these minerals, the flavour is badly affected. This is one of the major omissions of the conventional viticulture and agriculture, the roots are unable to reach the bottom soils, and therefore the vine has difficulty to obtain these elements. That is why, the grapes have less flavours and as a result wines are less tasty.
In fact this process is so complicated that it becomes impossible to artificially supply the vine with these complimentary minerals.

few people are aware of the importance of the soil's fauna: 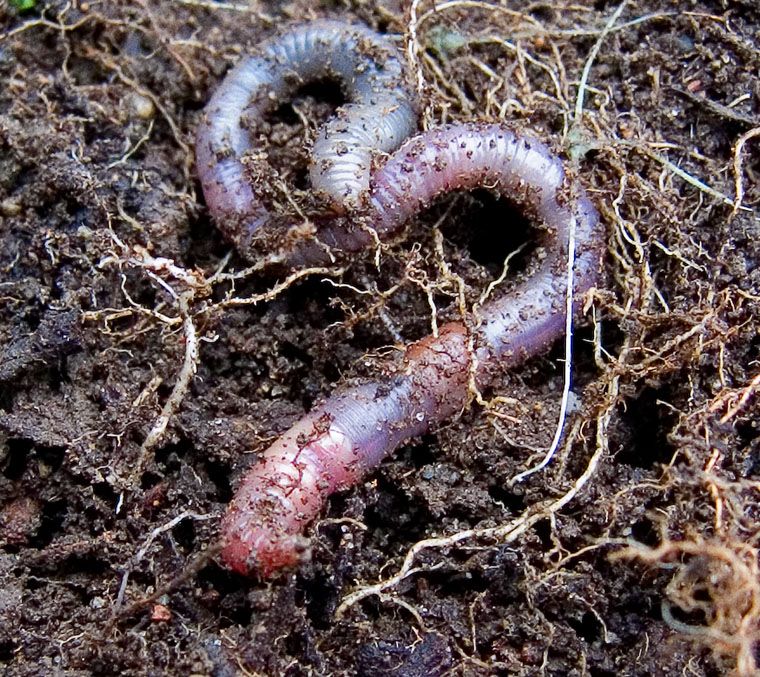 All earthworms collected were heavier than all the other animals on the planet! © pfly

The soil's fauna is essential for a good aeration, a healthy, well ventilated soil can absorb up to 100ml of water per hour, whereas an unhealthy and badly ventilated soil can absorb only 1ml of water per hour! Nowadays, this is one of the reasons why flowing water badly affects agricultural soils.
In preserved areas of civilization, where no chemical products are used, water flows are very clear and the water does not contain any silts.

The fauna is composed of a number of billions of insects:

Without these insects, the soil is unhealthy, these insects are in charge of assimilating and producing organic matter that each plant needs in order to grow. The chemicals products used in conventional agriculture have a catastophique impact on the fauna of the soil. 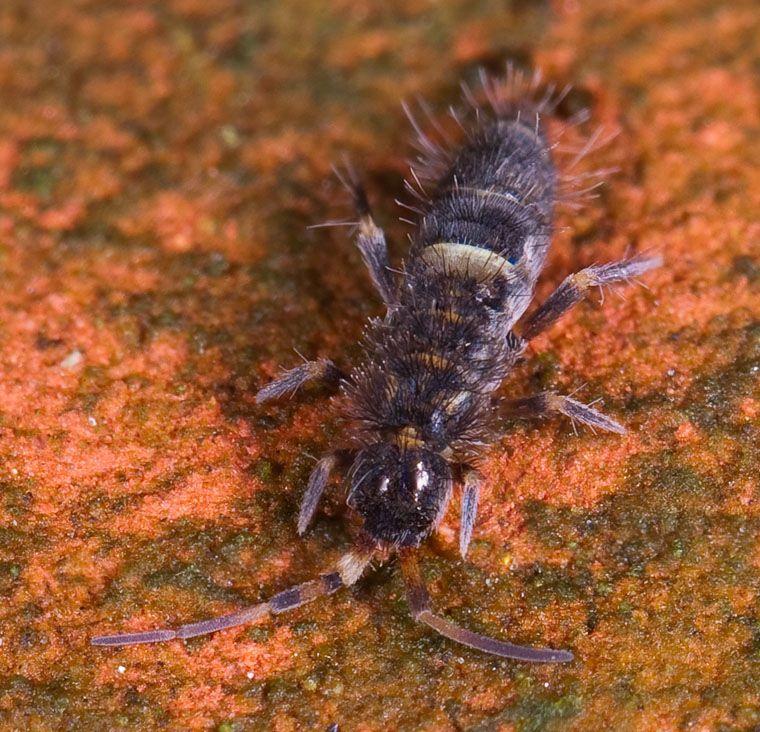 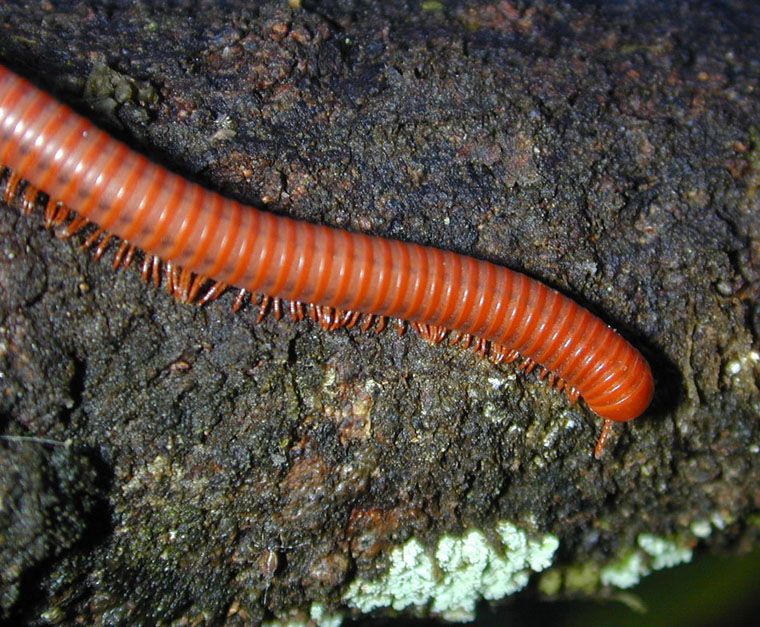 Plant roots permit a better ventilation in the soil. For example a well planted wheat has more than 124 miles of roots (200km). During the decomposition, there are thousands of routes which are caused by the soil’s fauna and which form bubbles in the soil (aeration).

The flora which is composed of bacterias and fungis finalise what the fauna starts.

Where is the world heading?

Currently there is an increase of 25 to 30% of all total biodynamic activity of soils which is notably represented by phosphorus, potassium, nitrogen, magnesium ...

How to explain? In the soils studied in biodynamy (especially soils in La Tâche compared to other soils of Domaine de la Romanée-Conti before being completely converted to biodynamic), The Bourguignon have seen an increase in the fauna in the soil, it is induced that assimilation is greater. Since there are more minerals, the metabolism of flavors is facilitated (see manufacturers enzymes flavors) and there is usually more flavor.

Conference held during an oenological lunch in Hotel Albert 1er in Chamonix. Claude and Lydia Bourguignon were invited by Christian Martray to bring a little knowledge to their loyal customers at the restaurant of Chamonix. 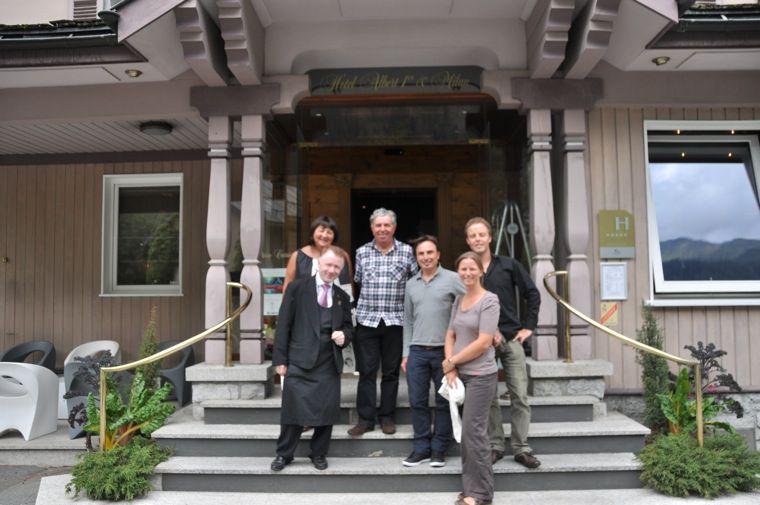 Front of the Hôtel Albert 1er in Chamonix 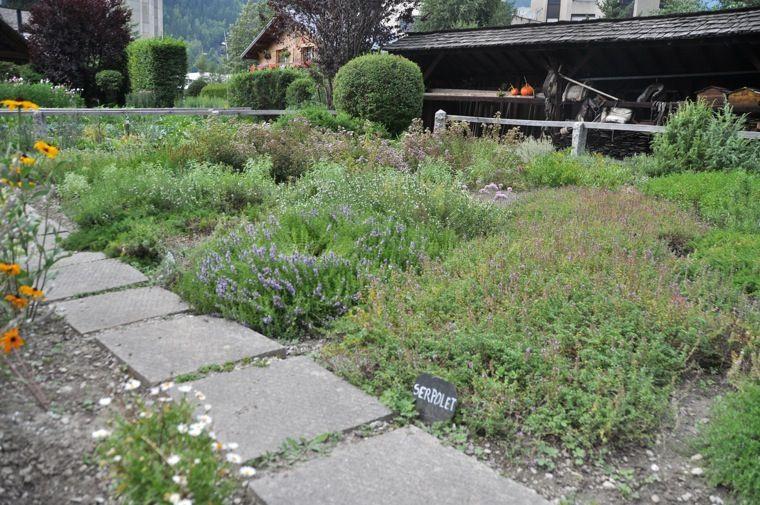 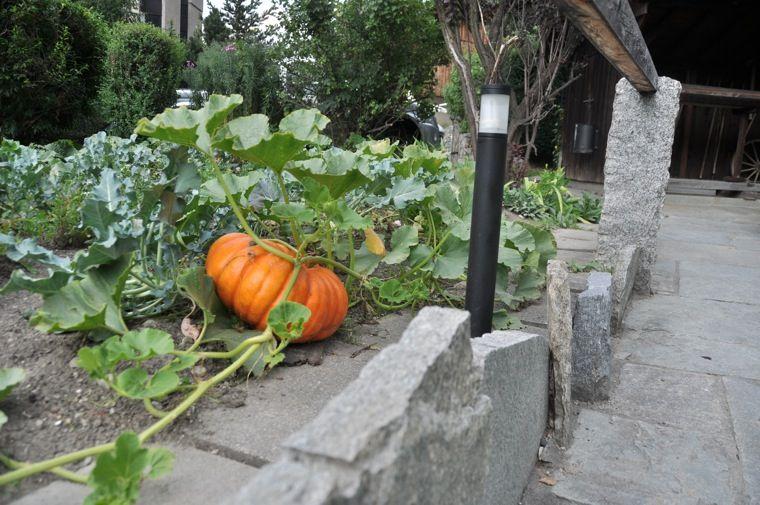 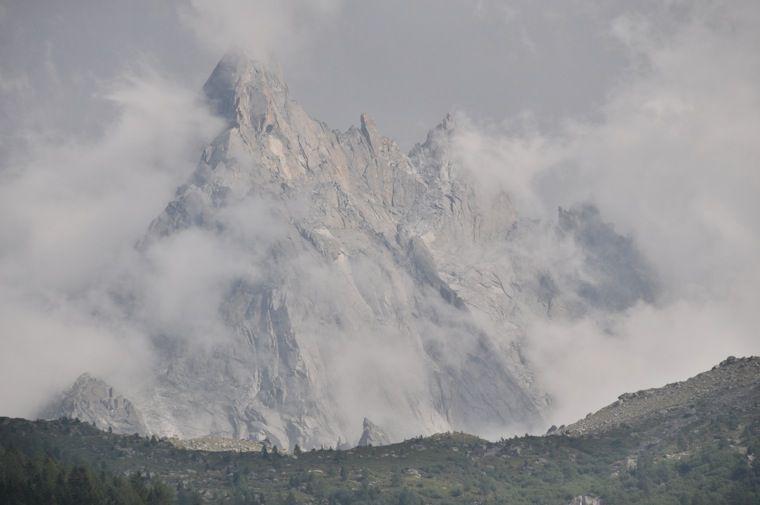