Guillaume Bodin started filming in the middle of the vineyard

Grey sky on the vineyards of Macon. A fine mist surrounds the hills giving the grapes a wet look. The earth breathes in and out in an absolute calm. With his handheld camera, Bodin is here to capture these living moments. He was -as usual- overjoyed with his passion for the vines and wine. A passion, turned into images in his later-to-be documentary film, Wine: the Green Revolution. In this film, he tries to put forward the biodynamic culture. A method that he hopes to put to practice on his own vines someday.

"To improve the wine, life in the soil is a pre-requisite. And for a soil full of life, one quickly turns back to organic means, then to biodynamy which is using less chemical products."

As a qualified young man, nothing was new to Bodin. Despite the fact that he was born in a non viticlture environment, he discovered the field early enough to explore all its subtleties. He says: "When I was eleven years old, a friend of my father invited me to his vineyard in Nuits-Saint-Georges, during the month of July; I was greatly amazed that I went back for the four following years." It was a fruitful exchange and Bodin went for a BEP degree specialized in viticulture, followed by a Baccalaureat and then an HND certificate in viticulture and oenology. But the fact that his teachers advocate conventional agriculture has eventually changed his mind. He says: "My training did not meet some of my expectations, especially with regards to organic and biodynamic methods. The teachers did not believe in these methods at all. At times, they were even very sceptical. Towards the end of my studies, I stopped discussing it any further..."

Bodin first started his venture in a small vineyard belonging to the Bret brothers in Burgundy. His second step was a trip to New Zealand in search of "wine makers". He discovered a true open-air laboratory with acres of vines and Entire fields were covered for new experiments. "As of 1980’s, the viticulture has appeared in this country, after having been banned for quite a long time. Suddenly, the winemakers are in full swing searching for vine varieties that would better suit their soil. Once these two essential elements got matched, they started producing very fine wines."

Guillaume’s first visit was not accidental. He knows that biodynamy is a hot topic in New Zealand. it is even the main topic of discussion at the vineyards. He says "I've worked in different areas and everywhere I go we exchange ideas and knowledge about the topic. Nine months later, I returned to France thinking that something should be done!"

To make this method better known and in order to clear its image, almost immediately upon his return, Bodin started a new challenge:  filming a documentary about biodynamic wine. From March to September 2010, he accumulated hours of shooting in the vineyards where he works: at the Bret brothers, in Burgundy, in the Loire region and in the Languedoc...

Bodin was able to go with his camera into the most famous vineyards. The winemakers usually discret about the topic became real actors in the movie, expressing their opinions. Bodin also interviewed Mr Aubert de Villaine the owner of the exclusive “Domaine de la Romanée-Conti”, who explained the benefits of these methods in his own vineyard. The Bret brothers allowed Bodin to reveal their secrets, such as the preparation of herbal horsetail, nettle, chamomile... The aim of the documentary is to show to the public that biodynamic methods are not esoteric. The exercise can however get a little more complicated when it comes to the cow-horn manure. This is a recipe which involves filling horns of cow dung and burying them for six months in a specific place, it then becomes a natural fertilizer for the soils. Some will be skeptical others will approve, the cow dung is a topic by itself. In his movie, Bodin invites his audience to understand, through a variety of beautiful images, the techniques which can be harmless for the planet and the human being.
Watch this documentary without moderation.

Bodin has another passion which includes skiing, climbing and mountaineering and he likes to share it with others. He is a qualified instructor in the French Alpine Club of La Roche/Bonneville. His passion already led him to many of the worldwide summits which can go up to 6000 meters high. With his first successful experience as a film-director, he is now planning to make another film about the risks of high mountains and the reasons why people go over it. 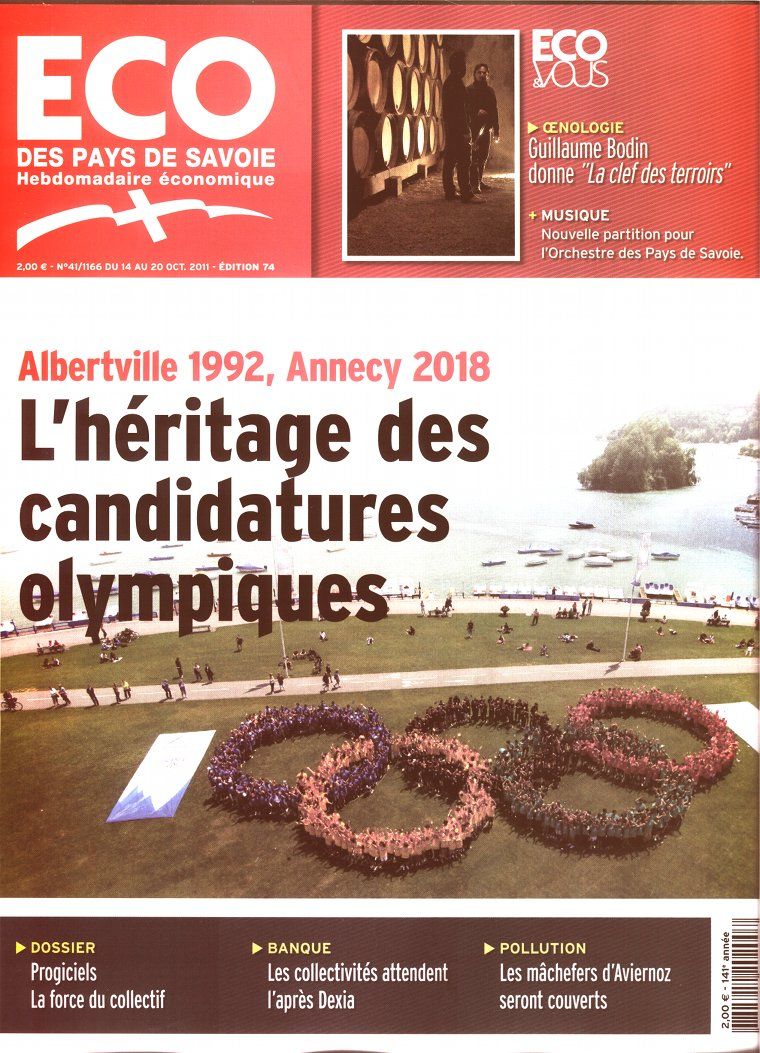 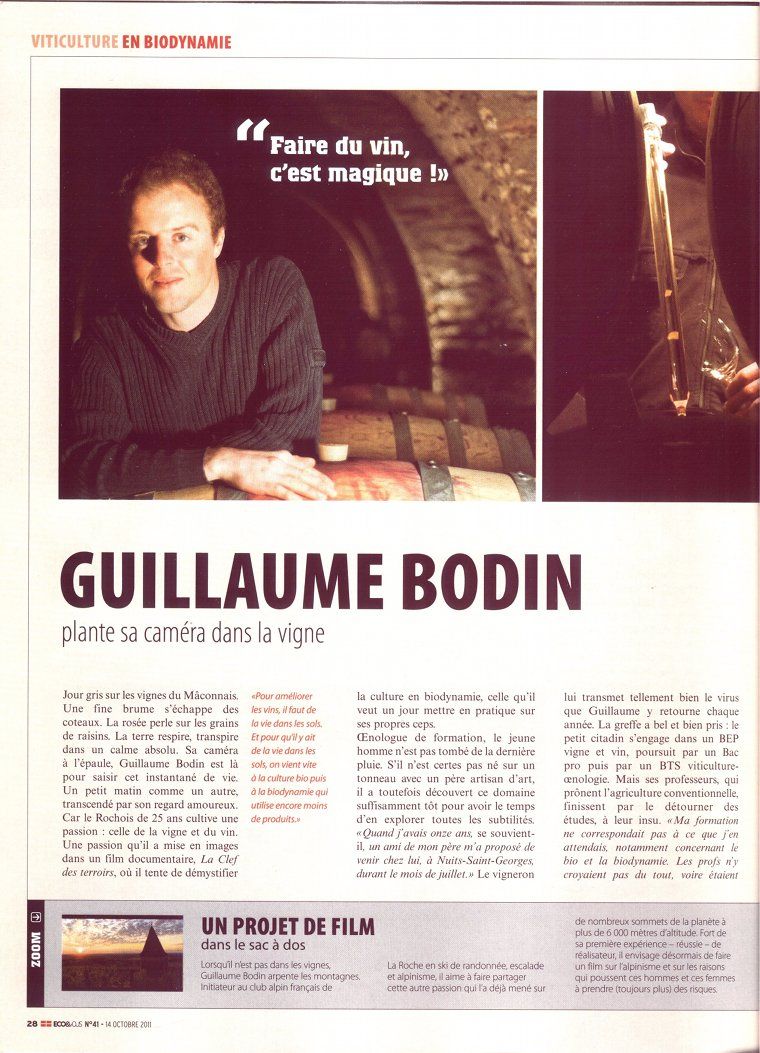 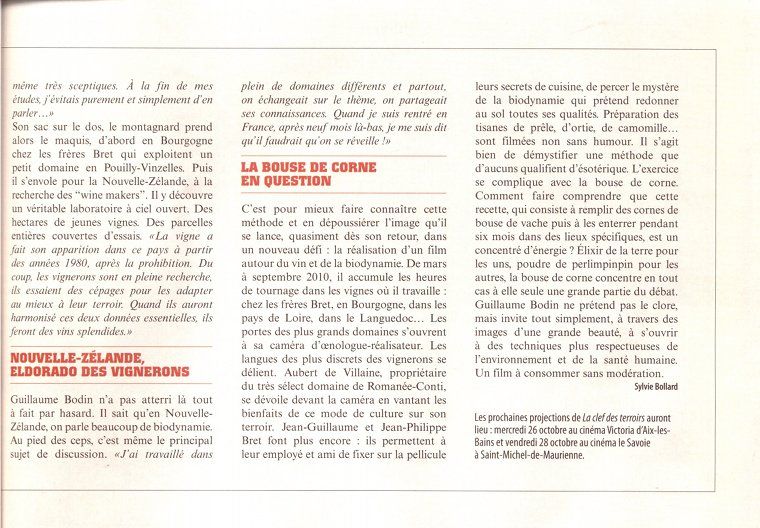